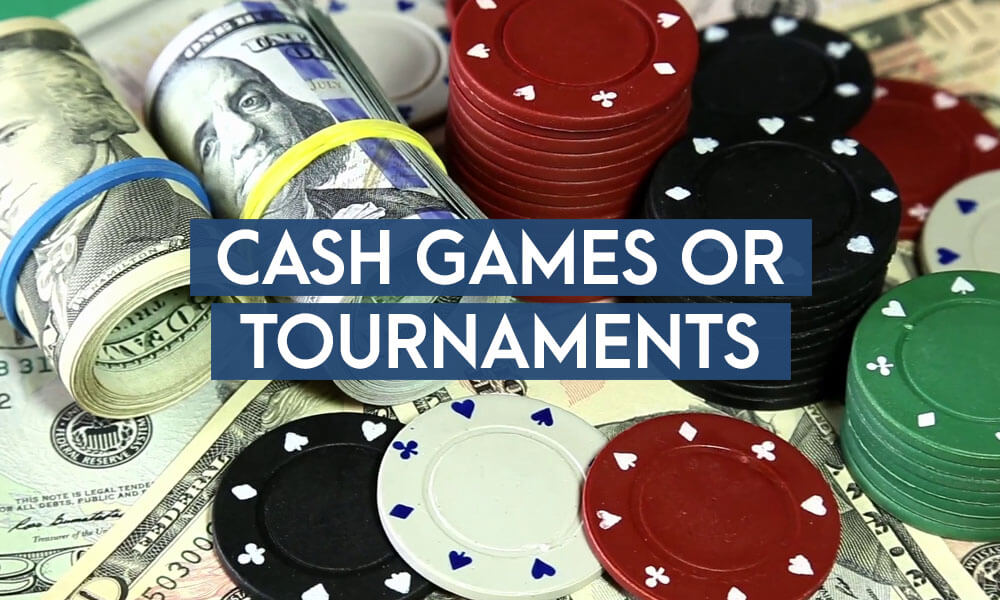 If you’re new to poker, you might wonder whether it’s best to play in tournaments and stick to cash games. Each offers its own advantages and disadvantages, and it may be that you prefer one over the other. However you prefer to play, you’ll find that often, a different approach is needed. Although both tournaments and cash games use the same rules for poker, you’ll need to adjust your strategy slightly depending on which you play.

What Are Poker Tournaments?

A poker tournament is a special event that sees players taking each other on and progressing up the ranks as they eliminate their opponents and gain more chips. The tournament culminates in a final table, with players taking home a share of the prize money based on their performance. This is the same for online poker and live poker.

There are lots of different types of poker tournaments, including freeroll, sit-n-go, and satellite tournaments. Each has its own distinct rules, but the objective is the same, to last as long as possible and reach the final rankings.

Players pay a set buy-in the receive a certain amount of chips. Some tournaments allow you to re-buy chips, but in most cases, the chips you have at the beginning must last you to the end of the tournament. Over time, the blinds increase to ensure that players with lower chip counts get eliminated faster.

What Are Poker Cash Games?

A cash game is much simpler than a poker tournament in that there’s no set start time, and you can enter or leave whenever you want. Cash games are available at most poker sites, as well as poker rooms and casinos. To join, you simply sit down at the table with your chips. The number of chips you have to play with will be how much money you’ve put in, but you can always buy more at any point.

There’s no set end time for a cash game either, so you can play for as long as you like. Because you exchange chips for cash, each chip has a real-world value, which is slightly different compared to a poker tournament. Some cash games do have minimum and maximum buy-in amounts, while others may have no limits, letting you gamble as much as you like.

In poker, the number of chips you have is limited. While you can find re-buy tournaments that allow you to buy back in, you can only do this at set times, and there will be limits on how many times you can re-buy. This means that your strategy and approach to a tournament should be slightly different. You’ll need to play more cautiously and avoid making decisions unless they offer a high expected value.

When you play tournament poker, you should play tighter and fold more often, even if you could call for a slight expected positive value. This is because the expected value can decrease on a later street, and folding will allow you to save your limited chips.

Tournaments also force you to change your strategy as the game goes on. Switching up your strategy from time to time is always recommended in poker, but it’s essential in a tournament. As the tournament goes on, the blinds will increase, forcing you to become more active and fold less often. Later on in the event, you’ll need to play more aggressively to ensure you’re not bleeding chips.

Blinds also affect how you play in other ways too. When playing in a tournament, you’ll want to focus on stealing blinds as much as possible. Lots of small profits over time can often be far more helpful than a few big wins occasionally. Because blinds get much bigger in tournament games compared to cash games, you have a much bigger chance of gaining more chips this way,

Take Your Focus to the Next Level in Live Poker Games