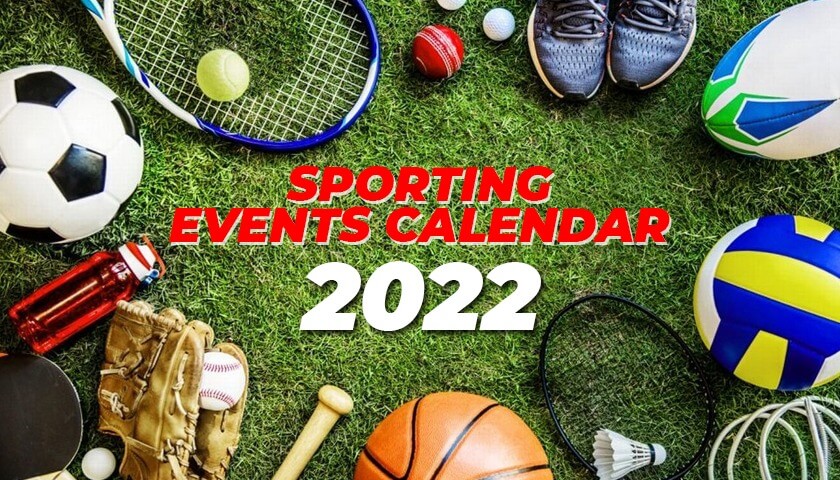 After a 2020 marked by cancellations due to the coronavirus, the 2021 that we left behind has meant the return of most of the competitions that were suppressed then. By 2022 we hope that the sports calendar will definitively return to normal. Below we present the 2022 sports agenda , where the Winter Olympics and the World Cup stand out above all, changing their usual summer dates for the month of November.

Sports federations and organizers have been publishing their calendars for 2022 over the last few months, although the threat of the coronavirus means that once again we have to take the 2022 sports calendar with a grain of salt. It seems that the postponements will mark the first weeks of the year, we cross our fingers so that all the events can be held successfully and on the scheduled dates.

With the sports calendar you will not miss any great sporting event this year. The Euroleague Final Four , the tennis Grand Slams, the grand tours and cycling monuments… Events that always bring us interesting sports bets and attract all the media attention.

Two events mark the beginning of the year: the New Year’s ski jumps and the Dakar, which once again will cross the Saudi desert. Without forgetting the final of the darts world championship. January is a month of cup soccer, and this year it comes with the plus of the African Cup postponed last year. The best rackets will look for the first big of the year in Melbourne. Spain will seek two continental golds.

A special month for basketball, with the Copa del Rey in Granada -and the return of the fans to one of their favorite events- and an NBA All-Star who recovers his complete program. We’ll join the scrum with the start of the Six Nations, we’ll stay up all night with the NFL Super Bowl, the Champions League and Europa League return … and the Olympic flame will rekindle.

The third month of the year smells of gasoline. The first weekend, Quartararo will start the defense of his MotoGP title in the Qatari night; and in the middle of the month we will discover the revolutionary Formula 1 . Will The Plan come out? Also on wheels, we will have the first monument of the season or the Volta.

The fourth month of the year is synonymous with strong emotions. Football lovers will experience the outcome of their favorite competitions, including the Copa del Rey final , but we have three cycling monuments, the Basque Country, the Godó and the Mutua Madrid Open, or the first stopover of MotoGP in our country.

With summer on the horizon, May is a month of endings. The League , the Europa League or the Champions League will lower the curtain. Also the Second Division, although in June we will live in the promotion playoff. Formula 1 will make its stopover in Spain, we will enjoy the Giro, Roland Garros begins and after two years of waiting the legendary All Blacks arrive in Spain.

We have reached the halfway point of the year crowning the champions of clay court, European handball and basketball in Spain and the United States. On the other side of the pond we still have one of the events of the year with golf, and the motorcycles will return to our country.

Bicycles are for the summer. The Tour de France will entertain us on July afternoons, although the first stages will have to share the spotlight with the Wimbledon grass. England will be very present on our screens with Spain trying to make history in the European Championship and golf. Hockey and athletics complete the menu.

As usual, the major soccer leagues return in August with the transfer market red hot. It is also the month of La Vuelta or the US Tennis Open, in addition to the third edition of the European Championships. Rowing, climbing, track cycling, artistic gymnastics, triathlon, table tennis, cycling, athletics, mountain biking or whitewater canoeing will deliver continental titles in Munich.

We continue to recover the events that COVID took from us. It will be Eurobasket’s turn, in the first tournament where La Familia will not have the Gasols or Chacho. The girls will take over from them at Mundobasket. Volleyball , cycling, rowing and women’s basketball will experience their World Cups, and the Champions League will begin.

October is one of the weakest months of the year, although leagues and Champions will advance before the World Cup break. Throughout the month we will see the start of the great basketball competitions, and we will close the cycling season at Il Lombardia.

The main dish of the year is expected to wait until November. It will be when the Qatar World Cup begins. When it starts, we will meet the motorcycling and Formula 1 world champions, as well as whether the Warriors have climbed onto the European podium. We will end the tennis season with the Davis Cup and the Maestras y Maestros tournaments.

In December we will know who succeeds France as world football champion, or if the Blues repeat the title. The Club World Cup should also be held. Outside of football, the Short Pool World Cup will be the last big event of the year, with the permission of the San Silvestre that close the year around the world.